The intestinal microbiome is certainly one of the most fascinating areas of scientific research nowadays. The systemic implications of our intestinal ecosystem are very profound and diverse, and they include the brain and the entire neuro-behavioral axis.

The idea that what goes on in the gut stays in the gut, is part of the past. There are more microorganisms in our gut than human cells in the whole body. This community of microbes has a fundamental role in maintaining health, through different mechanisms. In this article, we will focus on the interaction of the microbiota with the brain – the so-called gut-brain axis – and its contribution to neuropsychiatric conditions, such as anxiety and depression.

Is there evidence suggesting an association between neuropsychiatric disorders and the microbiota?

There are several studies demonstrating an effect of intestinal microbiota on depression and anxiety, including some that have looked at therapeutic interventions, such as prebiotics and probiotics.

In a particularly elegant study, published in 2016, researchers decided to transplant fecal material from 34 patients with depression into mice. (1) The study included a control arm in which the fecal transplant donors were healthy individuals. The mice that received depressed donors fecal transplants developed depressive behaviors, such as anhedonia, and increased anxiety. The control group mice showed no significant changes in their behavior. This is an animal study, which should never be seen as the best scientific evidence, but it is nonetheless fascinating.

In turn, a retrospective study in the United Kingdom, sought to relate diagnoses of depression and anxiety, with the prescription of antibiotics in the previous year. (2) The goal of the study was to understand whether individuals who took antibiotics were more likely to be diagnosed with one of the aforementioned conditions. The sample collected was quite large (about 200,000 patients with depression and 15,000 with anxiety). It was showed that taking antibiotics contributed to an increased risk of 25% for the diagnosis of depression and 17% for anxiety. Repeated courses of antibiotics further increased the risk (up to 50%). Since taking antibiotics is a disruptive factor of the microbiota, this association suggests the existence of a relationship between the variables, although it cannot establish causality.

How can the microbiota influence the brain?

We should think of the microbiota as a group of workers that inhabits our intestines, with which we can establish a relationship of symbiosis (in which both parties benefit) or dysbiosis (in which there is damage to the host). With regard to the central nervous system, the microbiota can interfere with its functioning, through the following routes:

Let us then explore each of these areas in more detail. 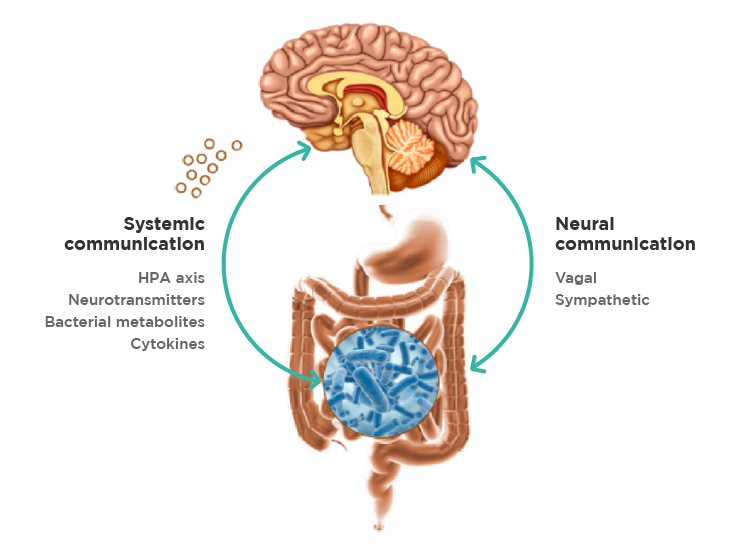 Certain bacteria produce substances that tend to activate our immune system and induce the release of inflammatory cytokines (chemical messengers). Acutely, we all have experienced changes in mood and energy when we are sick. This is due, precisely, to inflammatory cytokines, and can be an adaptive and protective mechanism. However, when this stimulation is chronic, even if not as exuberant, it can cause persistent activation of the immune system.

A 2011 German study with 34 volunteers looked at the effect of administering LPS, or endotoxin, on several parameters. (4) Endotoxin is a substance present in the membrane of Gram negative bacteria (a type of bacteria, which can be problematic, when in excess). These authors demonstrated that exposure to endotoxin had a temporary effect on the following parameters:

Fig. 2 – Effect of endotoxin administration on scores of positive mood, calmness, alertness and anxiety. The solid line refers to  the group that received the lower dose of endotoxin, and the dashed line to the higher dose group. Both are compared to placebo. (4)

2. Microbiota and the integrity of the intestinal barrier

The intestinal epithelium (inner lining of the intestine) has a key function, as it must allow the passage of nutrients, but should be “impermeable” to toxins and microorganisms, as far as possible. This barrier function depends on several factors, some of which are regulated by the  microbiota. The intestinal bacteria assist in maintaining the integrity of the epithelium, through the production of short chain fatty acids, such as butyrate, regulation of the inflammatory response and promotion of adequate levels of mucin (component of the mucus layer that protects the epithelium). The more permeable the intestinal epithelium, the greater the absorption of bacterial endotoxins, and subsequent immune system activation.

A 2018 study looking at 50 patients with depression, showed high levels of intestinal permeability markers, such as serum zonulin, when compared with healthy individuals. (5) 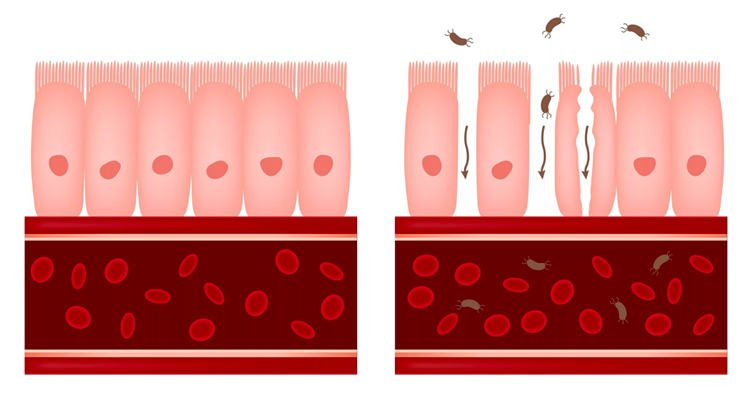 Fig. 3 – Schematic difference between an intact intestinal epithelium (left) and a situation where there is increased intestinal permeability (right).

3. Microbiota and production of neurotransmitters

Our gut bacteria can directly and indirectly interfere on the production of neurotransmitters. Serotonin is probably the most studied neurotransmitter in the context of depression, and the majority of drugs used to treat this condition have serotonergic activity. About 90% of serotonin in the body are produced in the gastro-intestinal tract, by specialized cells, in a process modulated by the intestinal flora.

In states of dysbiosis (imbalances of the intestinal flora), there tends to be a shift of the serotonin precursor – the amino acid tryptophan – to the kynurenate pathway, which results in reduced serotonergic activity. (1)

Additionally, there are species of Lactobacillus (members of the symbiotic intestinal flora) that are capable of producing GABA (gamma-aminobutyric acid), which is an essential neurotransmitter in controlling anxiety. (6) Probably, in the near future, we will be able to take probiotics that help us to compensate for potential neurotransmitter imbalances.

What can be done from a therapeutic point of view?

First of all, it is important to consult a psychiatrist and have the correct diagnosis. In combination with the adequate therapy, it is possible to work on restoring the balance of the intestinal ecosystem, ideally after microbiota testing. The main tools for microbiota restoration are the use of probiotics (bacteria with the ability to resist the gastric juice and temporarily inhabit the gastrointestinal tract) and prebiotics (dietary fibers that specifically feed certain bacteria from the intestinal flora). If there is severe dysbiosis, the use of antimicrobial agents (pharmaceutical or botanical) may be necessary.

It is important to emphasize the concept that the health of our microbiota is fundamental to our own health. As such, it is needed to maintain a diet that nourishes our “friendly” bacteria, and minimize exposure to agents with disruptive potential, such as antibiotics. This is an area in accelerated development and it will be interesting to follow its evolution.