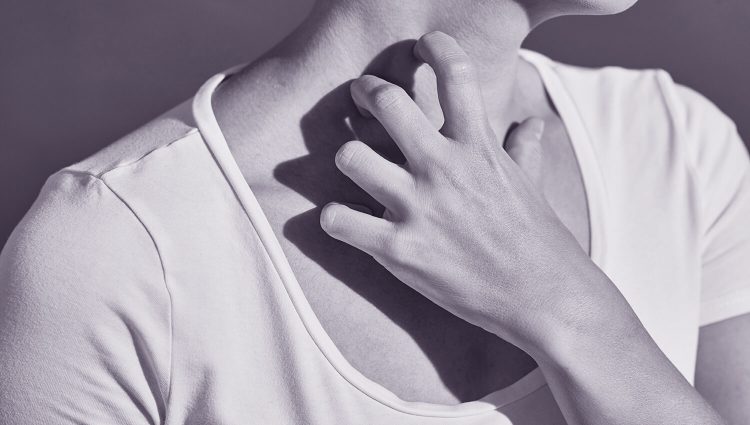 The following is the case of a 31-year-old female patient, C.S, who sought help due to allergic symptoms affecting the airways, skin, and gastrointestinal tract.

The symptoms began a year ago and had already motivated three visits to the Emergency Department, where C.S. received corticosteroid injections, which resulted in rapid clinical improvement. C.S. had already consulted an immunoallergologist and she was screened for allergens, without any positive finding. However, in laboratory tests, she had a high immunoglobulin E (a class of antibodies present on the mast cells and basophils membrane, which is elevated in some patients with allergic conditions).

The main symptoms of C.S. were the following:

A month before our appointment, C.S. had consulted a nutritionist who recommended gluten and dairy avoidance, which resulted in partial symptomatic improvement.

C.S.’s symptoms were suggestive of “Mast Cell Activation Syndrome” (MCAS). MCAS is a recently described entity in which mast cells (immune system cells involved in allergic reactions) are more likely to become activated and then release their histamine granules, which causes vasodilation and pruritus. The release of histamine affects multiple organs (skin, airways, gastrointestinal tract, etc.), triggering various symptoms. The conventional treatment for MCAS consists in the use of antihistamines, which block histamine receptors, therefore interrupting the allergic cascade.

However, from the lens of Functional Medicine, it is vital to understand the origin of mast cell hypersensitization. The gastrointestinal tract is an important site of foreign antigen presentation to the immune system, and it should be examined in case of allergies. In adition, C.S. had gastrointestinal complaints that even met the diagnosis criteria of “Irritable Bowel Syndrome”.

At this stage, a functional analysis of the gastrointestinal tract was recommended, including a Small Intestinal Overgrowth (SIBO) test and a comprehensive stool panel. The significant findings were the following:

In this test, the peak methane concentration in the first 90 minutes reached 26 ppm (parts per million), which, according to the 2017 SIBO diagnostic guidelines, indicates a positive result.

In turn, the intestinal microbiota testing revealed a healthy beneficial flora, with adequate levels of Lactobacillus and Bifidobacterium, but the presence of many yeasts on direct microscopic examination. Direct examination is essential in the diagnosis of fungal overgrowth in the intestine, as these microorganisms may lose viability during the collection process, which can result in false-negative culture findings.

This functional assessment made it possible to diagnose methane predominant SIBO and dysbiosis with fungal overgrowth, which could be promoting mast cell activation. These conditions were treated using botanical agents with bactericidal and fungicidal activity. After completing the initial treatment, a 2 month maintenance treatment with a probiotic (Saccharomyces boulardii) was recommended to prevent recurrence of dysbiosis.

C.S. experienced an almost complete resolution of symptoms, being now able to tolerate many more foods, without triggering any symptoms.

In this case, we can see the close relationship between the immune system and the intestinal microbiota. Imbalances of the intestinal flora can result in digestive problems and potentiate immunogenic responses to antigens of the microorganisms themselves, as well as molecules present in the ingested food. Through an integrated approach, it is possible to have a positive impact on the intestinal ecosystem, also contributing to the improvement of allergic diseases.

How to Preserve Our Health during the Pandemic?